Kleenheat Gas teamed up with mix94.5 and Channel Nine for the $100k Chock-a-Block promotion, to give one lucky Perth person the chance to win $100k. A number of Kleenheat staff attended the winner’s event at B Shed, Fremantle, where a deserving Alexandra from Marangaroo took out the prize, adding $100k to her bank account.

Over the last six weeks, listeners of mix94.5’s Clairsy, Shane and Kymba in the mornings, and Drive with Lisa and Pete, were offered the chance to go into the draw for $100k, simply by naming one song from a block of three. As an added extra, for viewers of The Block – Triple Threat, a clue was given away for the next day’s radio challenge.

The atmosphere was electric with the finalists wondering who would be the lucky person to walk away with $100,000.

Just after 8:00am, Clairsy, Shane and Kymba did a random draw, narrowing it down to just three finalists. The three finalists then had to choose one of three toolboxes – with only one containing the money!

Overwhelmed by her big win, even after having a dream about winning, Alexandra wasn’t sure what she will do with the cash – getting her car fixed (or a buying a new one), putting money on the mortgage, and renovating her 70’s style kitchen were on the list.

“I’m so speechless, I’m so grateful that I haven’t even thought about what I’m going to spend it on,” she said.

“It’s just going to help out so much with my mortgage.”

“I bought a house at 21 with my partner and we struggle like there’s no tomorrow so it’ll be so nice just to get a bit of relief.”

Alex entered into the competition with two friends from her work, and made a pact that if either of them won; the winner would give $10k each to the other two. How generous and wonderful!

“We have the best job ever,” said John Saratsis Sales Manager, Natural Gas & Electricity, at the event after the winner was announced.

“We get to help people save money every day on their natural gas, and now we are helping change someone’s life, with a $100k giveaway,” he finished.

CONGRATULATIONS to Alexandra and her two friends for entering the competition and winning a massive $100,000.

And what’s even easier than winning with Chock-a-Block? Switching to Kleenheat!

Check out kleenheat.com.au and pay less for the same natural gas you’re using in your home.*

*10% off the usage component of the standard tariff when choosing the Monthly Smart Saver Plan. Other terms, conditions, fees and charges apply. kleenheatng.com.au 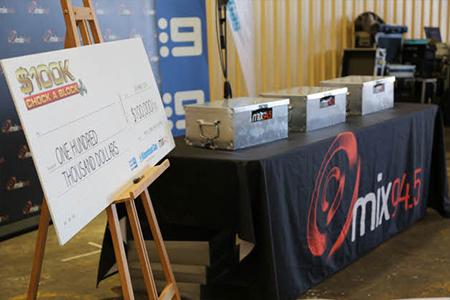 As everyone packs up to leave, Alexandra and her two friends still can’t believe their win