Red roses, chocolates, jewellery and cuddly toys are just a few of the classic Valentine’s Day gifts exchanged between loved-up couples each year. But why not think outside of the box and give your significant other something romantic and memorable this Valentine’s Day.

What’s more romantic than sitting under the stars, cuddling up on a bean bag lounge, enjoying some fine food, while enjoying a romantic comedy at the Telethon Community Cinemas.

This year, the Telethon Community Cinemas have several new release romantic comedies and an old classic for you to choose from and enjoy. And with several locations across the metropolitan area, there’s sure to be one close to you.

As a WA born and bred energy company, we like being active in our local communities and supporting worthy causes. That’s why Kleenheat is proud to be a supporter of the Telethon Community Cinemas.  They’re our home-grown family-friendly, affordable outdoor cinema, who donate all their profits to charities dedicated to improving the quality of life for kids who have health or physical ability issues.

Staffed by hundreds of volunteers, over the past 15 years, the Telethon Community Cinemas have raised almost $8 million for a number of charities, including Riding for the Disabled WA, Edmund Rice Camps, Camp Quality, Wheelchairs for Kids, Make A Wish WA, Ronald McDonald House, Starlight Children’s Foundation and Kids’ Cancer Group at Princess Margaret Hospital.

Love is in the air There’s nothing better than sharing time with and creating wonderful memories with someone special. A romantic night at the Telethon Community Cinemas and you may find you have a new, favourite romantic movie.

Characters surrounding this awkward romance include a fiercely Aussie Morris dancer, an Indigenous dance troupe, a group of wine-loving empty nesters, a power-tripping security guard, a wannabe girl rock band, some musical asylum seekers and Queenie the community radio superstar, played by Magda Szubanski, who welcomes the campers back three summers in a row for a good time. 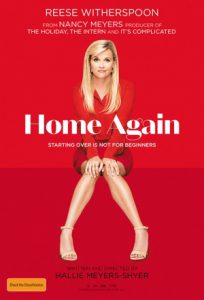 In Home Again, recently separated mum, Alice Kinney, starts over by moving back to Los Angeles with her two daughters. While celebrating her 40th birthday, Alice meets three young filmmakers who need a place to live. Complications soon arise when she agrees to let the men temporarily stay in her guesthouse. As Alice develops a budding romance one of the young men, her newfound happiness comes crashing down when her ex-shows up with a suitcase in his hand.

Wonder is the feel-good movie of the year. Based on the New York Times bestseller, it tells the incredibly inspiring and heart-warming story of Auggie Pullman, a boy with facial differences who enters fifth grade, attending a mainstream primary school for the first time. Auggie becomes the most unlikely of heroes, as his family, his new classmates, and the larger community all struggle to find their compassion and acceptance. Auggie’s extraordinary journey unites them all and proves, you can’t blend in when you were born to stand out.

And if you’re looking to revisit a cult classic or maybe see it for the first time, you can’t go past The Princess Bride. It’s about a grandfather who reads a story to his grandson about a beautiful young woman named Buttercup who is kidnapped and held against her will in order to marry the detestable Prince Humperdinck. Her childhood sweetheart, Westley, embarks on an epic and incredible journey to save her.

You can view the complete program for all the Telethon Community Cinemas.

7 Responses to “Cuddle up at Community Cinemas”